There are various ways of collecting the secretion from the frog. Some are considered ethical, and some aren’t. If you practice veganism, you’ll have to decide for yourself if working with Kambo aligns with your values.

Kambo frogs are nocturnal and can be found in trees near rainforest waterways. Traditionally, tribesmen call the frogs out of the forest by mimicking their sounds. 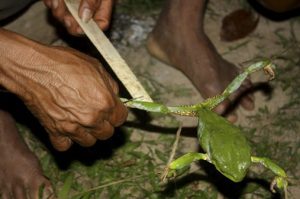 The frogs are easy to handle, likely because they have no predators, resulting from their potent secretion. Once caught, the frogs are carefully and delicately tied by the legs with straw strings spreading the frog into an X shape, to collect the milky secretion, occasionally, a female Shaman will massage the toes to encourage the secretion, a portion of which is then carefully removed and dried on small bamboo sticks. Some tribes leave their amphibian friends to sit on a branch while the medicine is harvested.

When properly collected, the Shaman is careful to only take the first lot of secretion. This ensures the medicine is strong, and that the frog has plenty of secretion left in case it needs to defend itself against predators, ensuring its survival! After the harvest is complete, the frog is returned to its natural habitat unharmed.

Either way, the frogs are passive when handled, are treated with the utmost care, and aren’t dangerous or defensive; even being known to come back the following days when the tribesmen call them out by singing their songs.

While it’s arguable that the frog is irritated in some instances, it’s important to remember that the Amazonian tribes working with the frog have a strong connection to the Earth, including the animal spirits and spirits of the land. They believe that to upset or harm the frog will bring negative consequences upsetting these spirits, and they definitely don’t want angry spirits when it comes to protecting and looking after themselves, and their communities!

When the secretion is collected in this manner, it is considered ethically harvested. 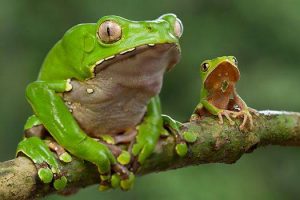 Kambo is in the ‘least concern’ category when it comes to being endangered. Their population is widely distributed across the Upper Amazon, with their only current threat being deforestation and destruction of their natural habitat.

All in all, another reason why it’s important to choose your practitioner wisely, making sure they know where their medicine comes from, and that the frogs aren’t harmed or over-milked in the process.