Legend has it that… 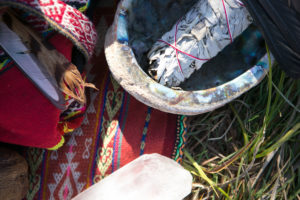 …many people in the Kaxinawá tribe had fallen ill and a medicine man, named Kampu, tried all known remedies to heal his people without success.  In desperation, he turned to the sacred Grandmother plant medicine Ayahuasca for help.  It was during this ceremony that Kampu received knowledge in the form of a vision from the Grandmother.  Kampu was told to seek out a particular frog, amongst the hundreds of frog species in the Amazon basin.   During his vision, he was shown how to harvest the milky secretion from the frog’s glands and was shown how to apply it to the human body for use as a potent remedy.  After the ceremony, Kampu returned to the village where he used his newfound knowledge to finally cure the members of his tribe. 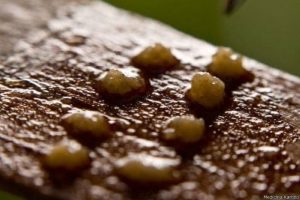 After Kampu died, the tribe believes he transformed living on as a Phyllomedusa bicolor frog. Kambo, a derivative of Kampu, is one of several names given to the frogs waxy secretion.

The Giant Tree Monkey Frog, known as the Phyllomedusa bicolor, is found throughout the Amazon rainforest of northern Bolivia, western and northern Brazil, southeastern Colombia, eastern Peru, southern and eastern Venezuela, and the Guianas. The Phyllomedusa bicolor is a nocturnal, arboreal frog. The Kambo frogs consume bark, leaves, flowers, roots and insects as their primary diet.   After mating, the female and male frogs construct a leaf nest above forest pools. The eggs are laid on these enormous leafs and hatch from the nests.  As the tadpoles fall into the water, they continue their development into adulthood.  Peak reproduction occurs during the rainy season although the frogs are said to reproduce throughout the year. 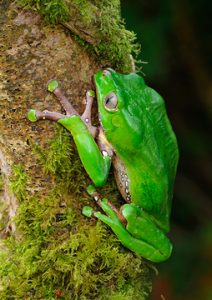 Concerns for the frogs extinction are unnecessary as the IUCN endangered species database lists them in the category of “Least Concern”.   Extinction may only occur as a result of the loss of habitat and the failure of world governments to protect the natural and human resources in the Amazonian region.

Kambo (also known as “the vaccine of the forest”) is one of the strongest ways to empower our body, mind and spirit.  The frogs secretion is loaded with huge stores of bio available peptides all provided by nature through its forests and jungles.  It’s no wonder the Kambo inoculation imparts such powerful benefits when applied to humans. Currently, Kambo is legal in the United States, and other countries throughout the world with the exception of Brazil where ANVISA has restricted its’ commercialization due to an agreement with several Amazonian tribes.